Upon Your Return (Genre: Historical Romance)

Here is an excerpt from my latest release

A gasp broke through the stillness in the room. “Fara? Is everything all right?”

“There is an opera at the playhouse in town. Would it be too much trouble to attend this evening?”

He weighed the decision. They both knew she was in mourning, but it had been several months since her uncle’s passing. Despite the social norms of wearing dark garments, Fara didn’t conform on a regular basis, and she had begun to wear the colorful gowns she’d worn before the funeral. It couldn’t hurt to give her this one event, to allow her to enjoy herself. More than anything, he wanted to witness her smile again. It had been so long since he’d seen her look happy. “I can think of no reason not to go.”

“Oh, thank you!” She ran to him and embraced him. “You don’t know how difficult this has been. I have wanted to do something enjoyable for so long.”

“I know.” Aware of her sweet, appealing scent, he pulled back from her and tried to compose himself. “I will see if I can purchase tickets for the evening show.”

“Oh, my….” Her eyes grew wide with something he couldn’t read. “What will I wear?”

He laughed as she ran to search her wardrobe, calling for her nursemaid in mock panic.

That evening, they arrived for the first time together at a social event. The opera house was decked out in gold and alabaster pillars. The floors were covered with red velvet carpeting and the theater itself was elaborate with scrolled ironwork.

But Grant couldn’t keep his eyes off Fara. She wore a long velvet gown, plum colored with ivory trim. The torso of the gown fit close to her body and the material covering her bosom was heart shaped. Her hair was done up, but the locks fell close to her ears and gave a splendid view of her neck. And what was more, he felt as if they arrived as an affianced couple, even though he knew it was otherwise.

It felt so right to be with her. 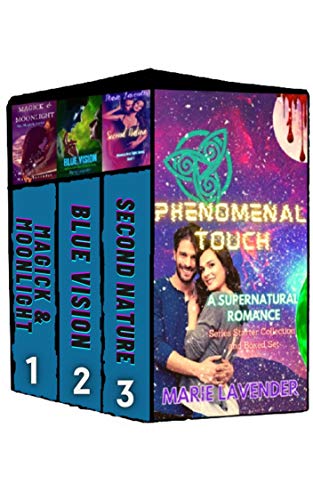 Summary/Tagline: From light contemporary fantasy romance to space opera, to all out fangs and sensual moments, this starter set has everything a paranormal/fantasy/sci-fi romance book lover could want…

In this never-seen-before union of tales, you’ll discover three full mystical stories by Marie Lavender. Finally, a collection that fans can sink their teeth into! From light contemporary fantasy romance to space opera, to all out fangs and sensual moments, this starter set has everything a paranormal/fantasy/sci-fi romance book lover could want…

Jessie hides her magickal secret to protect herself from Ethan, the town’s new resident. But she never imagined casting a simple spell could turn out so wrong, and oh, so right.

Brooke isn’t sure what to make of Colin, the mysterious stranger with those striking eyes in the cold Montana wilderness. But she gets way more than she bargained for when a vacation fling turns into danger for the whole planet.

Vampires are real! Not only must Desiree come to grips with that fact – plus the perils involved in such a discovery – but also, she must contend with her odd attraction to a strange creature named Alec. Plus, there’s the notion that her origins might be far different than she once thought.

Get your copy of a sexy, supernatural, specialty boxed set today!

Tagline: The more he learns about this unique human, the harder it is to deny what he wants.
Then, an old enemy surfaces and Alec is forced to make a choice…his life or hers.

Tagline: With more attention than she ever imagined, how can she tell if this is real or a fantasy?

Tagline:  Love spells are dangerous, even more so for those who cast them…

Love spells are dangerous, even more so for those who cast them…

Ethan Hamilton moves to a lazy little town in Oregon, hoping to escape his demons. Instead, he discovers a woman dancing nude in the moonlight. This woman who claims she is a witch dazzles him with her sensual presence. He thinks she’s crazy, but what if she’s not?

Jessie Anderson has been taught that her kind hides who they really are. And she has a problem on her hands. Someone knows her secret and she must do all she can to protect herself. What other choice does she have? Jessie casts a spell on a good man, a man with whom she can’t fight her attraction. The spell doesn’t work quite as planned.

Messing with free will is always a bad idea.

To top it off, Ethan’s treatment of her is so addictive. Deep down, she knows the effects will wear off, and yet his feelings seem genuine. It’s just a spell…right?

Tagline:  Can the biggest mistake of Aly’s life turn into the promise of new love?

When Alyssa wakes up in a strange place at school, she can’t remember what happened the previous night. A new friend, Justin, offers to help her out. As she makes discoveries that force her to accept a different reality, she finds herself drawn to Justin for a number of reasons.

Can the biggest mistake of Aly’s life turn into the promise of new love?

Brooke Sanders just wants to get away from her life for a while. A remote cabin in Montana fits the bill. She doesn’t expect to encounter a mysterious stranger with unusual blue eyes, or events that cannot be explained…

Colin Fielding is on a mission – scout a planet and return home to Endhivar. Such a simple plan. Except fate has a twisted sense of humor. This human calls to him, every part of him, like the call of a true mate, and he can’t deny the connection as he gets closer to her.

Little do they know, someone is out to do them harm, as well as the world Brooke holds so dear. Can they stop what’s coming before it’s too late? Or will the universe lose a perfect gem?

The book trailer is right here!

Here is another excerpt for your viewing pleasure!

Desiree had just shut off the faucet when the lights suddenly went out, shrouding the room in darkness. “Shit!” she muttered. She fumbled for the light switch, but nothing happened.

Now, where were the candles? Her hands groped the surface of the counter, catching things that spun to the floor. She tried to remember what direction she must walk. Right. She walked slowly along, and cursed when she stubbed her toe on a table leg. Her hands found the hard wood surface and then there was nothing, just air. She kept walking little by little, her arms outstretched until her palms met cold glass. The sliding glass doors to the patio.

She was startled by the light for a moment, a hazy purple glow. It dawned on her then. Her solar-powered lamps had come on. She froze suddenly as a thought dawned on her. Oh, God! They were motion-activated! Her mind raced with the implications of the invasion. Had someone been in the yard? Cut the power to the house? A claw danced up her spine at the thought. Goosebumps pricked at her arms. Peering into the semi-darkness, she sucked in a breath as she saw a pale face on the other side of the glass. She screamed, stumbling back. With the dim light shining, she was able to locate the butcher knife off the block and raise it in the air. Her senses strained, she crept back towards the glass, but there was nothing there now.

She frowned. Had she imagined it, the ghostly figure from before? She wanted it to be just coincidence that her power was also out, but realistically she knew that she couldn’t be that lucky. Was this somehow related to the incident upstairs last week?

With her knife poised, the muscles in her arm now shaking with tension, she scanned the patio. Still nothing, but someone was there. She felt it. Hairs rose on the back of her neck. Time ticked by, too slowly for comfort. She felt a weird tingle in her skin, but she ignored it. Her eyes burned now from the effort of peering.

Out of the corner of her eye, she caught movement. She swung, her heart pounding in her chest, and sought the source of the motion. Still nothing. She could hardly tell what the danger was over her loud heartbeat. But she still sensed it, like a deer that knew a predator was close by. She thought she would go mad with the waiting. Then she saw the dark figure at the end of the hall. On impulse, she turned, ran to the glass doors, slid one open and raced across the patio. She gripped the knife until her fingers felt numb.

Suddenly she was tackled to the ground, a heavy bulk falling on top of her. She sucked in a breath to scream, but a hand covered her mouth. She bit down hard, but there was no response. Her assailant grasped her hand and shook it wildly until her grip on the knife loosened and it fell away.

This site uses Akismet to reduce spam. Learn how your comment data is processed.

Random rants, musings and opinions that nobody asked for :)

Happily Ever After with a Sprinkling of Magic

His Gospel - My Life

I make photographs and poems to please myself (and share them to please you).

Pass Me That Book

“It was a lean dark brig, and Morgan's eyes widened at the sight of its rakish lines in the moonlight."